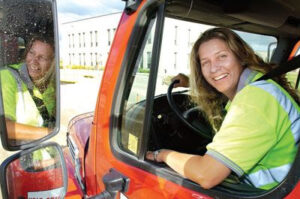 The number of women pursuing and earning their commercial drivers’ licenses is growing every year. Of the more than three million truckers in the United States, it is estimated more than 270,000 are women. That figure represents a fifty percent increased since 2005. As far back as 1995, there were 130,000 with that number growing to 155,000 by 2005. The number of women working in trucking careers is growing and there is one estimate that suggests that, by 2020, there could be as many as 700,000 women working as truck drivers. Even though women are gaining a presence in the industry, stereotypes persist. Some people might view driving a truck as not feminine or that women lack the strength or capability of controlling a big rig. However, research shows otherwise. According to statistics, female truck drivers are three times less likely to get into an accident and five times less likely to violate safety regulations than their male counterparts. Trucking companies are finding that, on the whole, female drivers are more reliable, and arrive on time more often. This has swayed some trucking companies to actively recruit women to the industry where, in the past, there may have been a little reluctance. In addition, a study by the Women in Trucking Association measured behavioral traits of male and female truck drivers. Women scored highest in patience followed by conformity. Both traits are important in a profession that requires fighting traffic and having to abide by many rules and regulations. The United States is experiencing a shortage of truck drivers, so now is an opportune time especially for women to pursue a job in the industry.